The Republic of Korea (herein after Korea) is a country that more than ten million visitors from abroad come to visit every year. With its long history in culture and tradition, the country has a lot to offer to travelers. Please continue reading to learn general information about Korea before visiting. 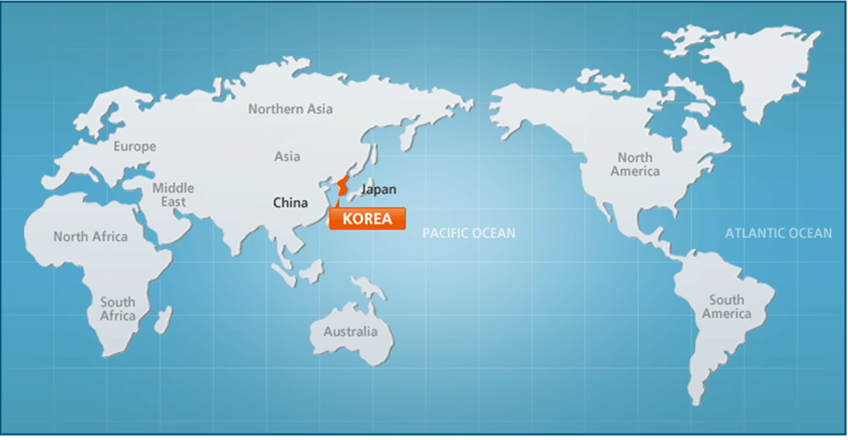 The Korean peninsula, roughly 1,030 km long and 175 km wide at its narrowest point, is located in Northeast Asia. With Seoul as its capital city, Korea's total land area is 100,033 ㎢. Korea's neighbors include Japan to the east, China to the west, and Democratic People's Republic of Korea (North Korea) across the northern border.

The current design of Taegeukgi was finalized on October 15, 1949. It symbolizes the principles of the yin and yang in oriental philosophy. The circle in the center is divided into two equal parts, where the upper red responds to the positive cosmic forces of the yang; conversely, the lower blue section represents the negative cosmic forces of the yin. The flag's background is white, representing peace and purity valued by the people of Korea. The circle is surrounded by four trigrams, one in each corner, characterizing continual movement, balance and harmony.

The national flower of Korea is mugunghwa, or rose of Sharon, which comes into bloom from July to October every year. A profusion of mugunghwa blossoms gracefully decorate the entire nation during blooming season, providing a view that has been loved by Koreans for many years. The flower’s symbolic significance stems from the Korean word mugung, which means immortal.

Aegukga literally means “a song expressing love towards their country” in Korean, and it was originally meant to foster patriotism and raise awareness for the nation’s independence. The anthem had undergone several changes since it was first introduced until it took its current form. Maestro Ahn Eak-tai (1906-1965) rearranged the piece in 1935, which was then officially adopted by the Korean Government as the national anthem. Since then, the anthem began to be used at all schools and official functions.

Korea has four seasons, with a wet monsoon/summer season in the middle of the year, and a cold winter from November to March. The ideal time to visit Korea is during the autumn months (September-November). During this time, the country experiences warm, sunny weather, skies that are cobalt blue and spectacular foliage that is perhaps the biggest draw. Winters are cold and dry and are a good time to visit if you are interested in winter sports as there are numerous ski resorts. Spring (April-May) is also beautiful with all the cherry blossoms in bloom. However, it is very busy and one needs to book in advance to ensure accommodation is available.